I am testing and debugging my own Error handling in a Flutter application. On the server I filled a ResponseStatus object with some fake data and returned it. In C# it looks as follows:

In Dart the ResponseStatus object inside my Response object is always null while the json Map contains the correct data as you can see in the below screenshot from the debugger in AndroidStudio.

So I tried to debug it. In a file called client_dtos.dart I found the class ResponseStatus:

I could step through the fromMap method and this contained the correct data you loaded from the map. However when the debugger jumps out of the fromMap named constructor, its all empty.

I don’t know what exactly is going on, but I personally use FactoryConstructors. That would look as follows:

I don’t know if it would fix the problem, since that source code is not part of my project.

We’d need a minimal repro to investigate, but since it’s your own custom error handling have you tried using your own Response Error DTO? that way it’s using your generated DTO instead of library DTOs that you can’t control.

Eventually this is a misunderstanding. With my own error handling I meant that I just wrote DART code to deal with the Future results I get when calling any async (REST) API call and show a suitable message to the end user. On the server side I follow this recommendation for all my APIs.

So I create my own client models out of the ServiceStack generate DTOs, but only for the data inside the ResponseDTOs, not for all response DTO objects. Let me show you an example of one endpoint to see what is going on.

In my APIs I often have an optional fields parameter which allows to filter those property of an object that you need (instead of returning a large complete object). As you can see, the Response object has three members:

This means I have to test all three possibilities in the list above on the client. The first check is always to test if ResponseStatus is null. If it is not, it means there is an error and usually no data is in the Response object. I then display the errors to the user. If the Response object contains data, I convert this data to my own client models.

So in Dart I usually get a Future<ResponseDTO> back when calling a ServiceStack service. To check the result I have code similar to the following:

(This method returns a Future<bool> because of Flutter state management, it is called in the initState method of a UI Widget and uses a Builder to show the result or an error message. I don`t elaborate more on this, there are people who have written books about state management…)

But back to what I meant with my own error handling. In the _fetchCreditCard() method you see the checks I mentioned above. In the first if statement I check if response.responseStatus != null which would mean there is an error which I will show in a SnackBar control. Since I called the Request without submitting the fields array, I do not check the Dictionary at all.

So everything works fine if a CreditCard DTO is returned. To test if error messages are correctly displayed, I nulled the returned CreditCard DTO on the server side service and filled the ResponseStatus object of the ResponseDTO manually manually with some fake data.

I saw this working already but I think last week we had updates on Flutter. I will test in other places. But currently it is a matter of fact, that whatever I get back from the .NET Server, the ResponseStatus object is always null which means my error handling in Dart is not working anymore.

UPDATE
Something is going terribly wrong here! I now throw an Exception on the Server instead of returning something. Now this is appears in the catch block of my Dart code, NOT in the response object. The error is of type object but in the debugger I can see that it contains a ResponseStatus:

So this seems to be a problem when using try ... catch in dart and not a FutureBuilder. I need to research this further…

I have added two projects to GitHub which let you reproduce the problem.

I run everything on a MAC (I don’t have Windows), read the README.md files for details.

The Error Response that gets returned when an Exception is thrown varies on whether a conventionally-named {RequestDto}Response DTO exists or not.

Otherwise, if it doesn’t:

A generic ErrorResponse gets returned with a populated ResponseStatus property.

So it looks like your issue is that your property is named Status instead of ResponseStatus since the Response DTO will be returned but has no ResponseStatus info to populate, which causes ServiceStack to return the DTO without being able to populate the error information.

If your not using ServiceStack’s built-in error handling (i.e. want to return a 200 OK with your own Status error property) can you use your own Error Response DTO to capture your own error information.

Yes in the provided sampe it is wrong and I fixed it. (In my production version it was correct) So the question is the following:

Should this code work (is it allowed to CREATE a ResponseStatus object MANUALLY and return it in a {RequestDto}Response object as shown below ?):

If you say YES, this does NOT work, in Flutter the object is NULL.

And if I fill the Errors List with a few entries, it is not only null, it crashes.

Interesting enough: I changed my code a bit to generate a “naturally Exception” by accessing a member of the list, which is out of range. This of course creates an exception and in this case the ResponseStatus is filled correctly.

As I explained yesterday, I created a ResponseStatus object manually, to test my error handling routines on the flutter client.

I have updated my source code (both projects) and pushed it to GitHub. You can play around with that code to see what I mean.

To create a manual Error Response you should return it in a HttpError. If you want to return a custom status in a normal Response DTO I’d recommend using your own Error Status types as suggested earlier since this isn’t related to ServiceStack’s built-in error handling.

I’ll look into what the issue is with returning a ResponseStatus object in a Response DTO.

When I use your projects, I’m getting the following in your client app.

The client is haven’t trouble deserializing the ResponseStatus, or more specifically the ResponseError list, so does seem to be choking on a null even though yes the payload has the data.

Changing your server code to return a HTTP status of 500 results in populating status code just like exception (any code >=400 should do the same). Eg 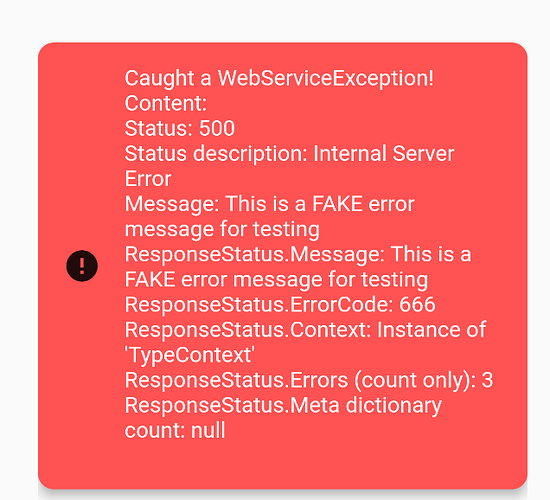 Response status populated as expected when the error handling in the client parses the data successfully.

EDIT: I can’t see in your if you explicitly want to avoid returning a HTTP status code error or just handle in body as 200 as @mythz suggessted, so please my post ignore above if you want to return 200 and handle yourself.

Hi Guys,
Thanks for looking into that. I learned the following:

In my service layer on the client I call the following:

But that is NOT the case! So if you change my server code and undcomment the following line in the GetAddressList Service:

this will throw an OutOfBoundsException. It appears as WebServiceException in the catch block above!

So maybe you can clarify this. Is it normal, that Exceptions in my backend are thrown as WebServiceExceptions no matter wheter I define a ResponseStatus member in my <RequestDto>Response class or not?

I expected to never see any service exceptions (such as WebServiceException ) in the catch block above.

I’ve no idea where you got this expectation from, all WebServiceExceptions have only ever appeared in catch blocks.

Is it normal, that Exceptions in my backend are thrown as WebServiceExceptions

All Server Service Exceptions throw WebSericeException’s in all Service Clients. If you use a conventionally named Response DTO (<RequestDto>Response) it will populate the ResponseStatus if it exists, if it doesn’t the error message only exists in the HTTP Status Code and Status Description which is what the WebServiceException has to fallback using, but in this case it can’t populate more structured error information like field validation errors. If you don’t want to make use of ServiceStack’s built-in error handling (i.e. return 200 OK with custom status) then you should use your own Status DTOs so it’s not confused with ServiceStack’s built-in error handling.

Issue with using built-in ResponseStatus should be resolved in latest Dart servicestack 2.0.1 library.