I recently started using hyphens in my route urls and it causing me some issues, which I hope we can clarify.

In my ServiceModel, I change an API endpoint route attribute to use a hyphen as follows:

After making the change, the correct entry appears in swagger-ui and the route works correctly:
https://localhost:72560/api/app/user-setting works correctly. 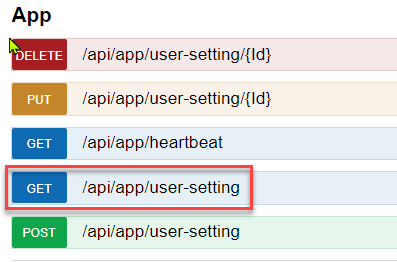 As part of the changes, I also upgraded from ServiceStack 5.12.1 to 6.0.3, so in AppHost, I made the following changes as discussed in After upgrading from 5.13.2 to 6.0.3 swagger-ui is not working

Strangely, if I remove the hyphen from the above route, the additional entry and route remain. I have also cloned the code to a clean laptop and have the same results.

I’m only seeing the 1 expected route:

How can this be repro’d?

After updating to 6.0.3, I simply added the hyphen to the Route and the problem appeared.

As soon as I have a moment today, I will create a minimal sample.

So, it must be something related to upgrading from the project’s previous ServiceStack 5.12.

I will try to reduce my original project to a suitable, minimal, level to demonstrate the problem.